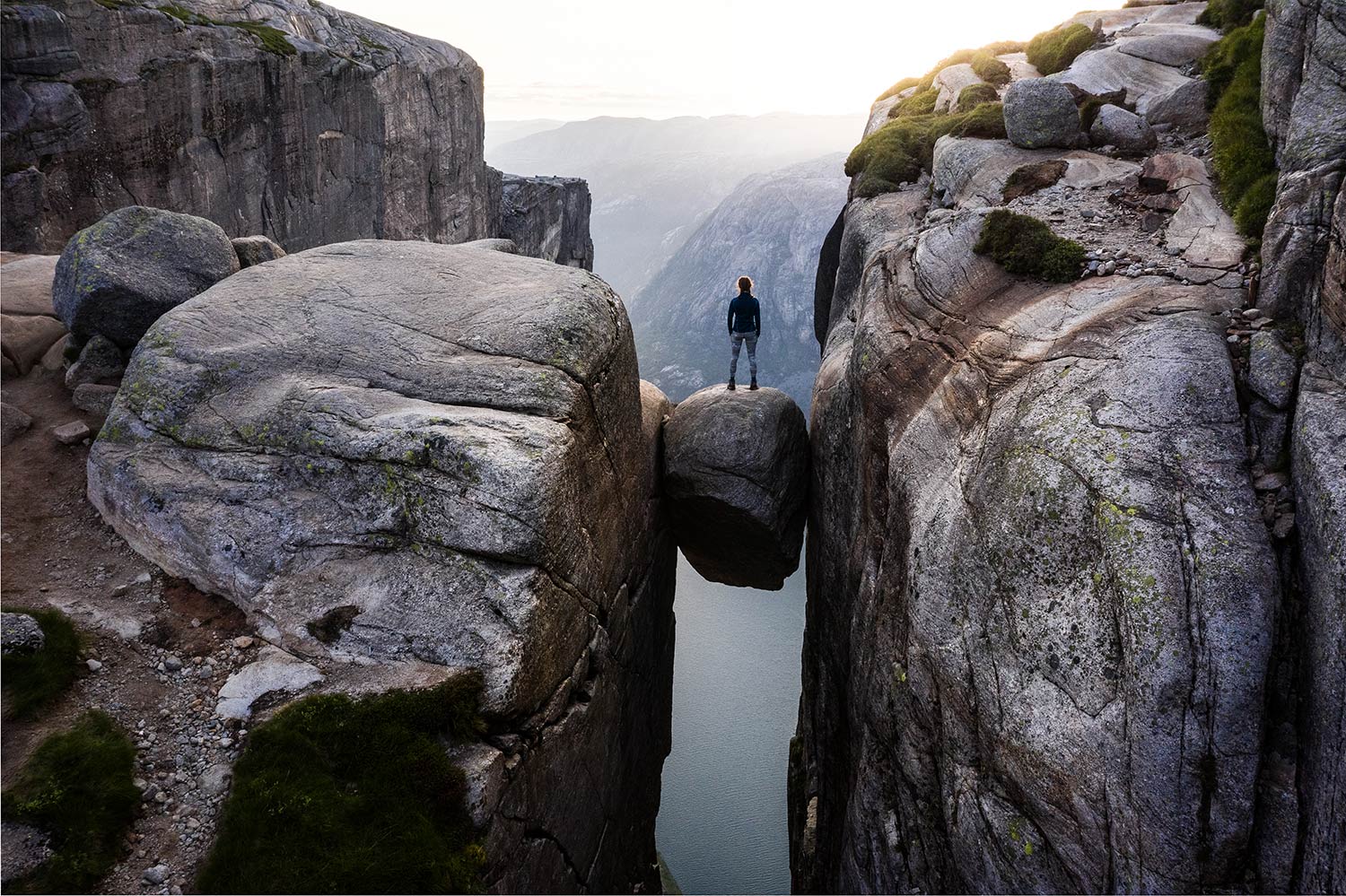 You can’t go to Norway and not yomp the hills, much less pass up on Kjeragbolten. It’d be like going to Mount Rushmore and saying, “Oh, we didn’t bother with the big carved mountainside thing. We just had a look in the gift shop.”

Kjeragbolten (also known as The Bolt), is a glacier deposited boulder wedged neatly into Kjerag’s crevasse in southern Norway. Reliably informed that a moderately challenging 5.5-mile (9.1-kilometre) hike  without any climbing equipment, would get us to this climactic end with towering views of the Lysefjord 984-metres (3,228-feet) below. There was nothing to lose except your footing…so the Norwegians said.

After the last ice age, global warming caused a rise in sea level, flooding the fjords. Around 50,000 BC the glacier melted, which was accompanied by a rebound in rock formations as the ice disappeared. In Kjeragbolten’s case, the rising sea level couldn’t keep up with the speed of the rebound, which sandwiched the 5-cubic-metre rock into its current position, flanked on both sides by Kjerag. As natural features go, it was quite astounding.

Feeling unnerved, to say the least, waiting for Jase to get the shot – despite putting myself in the precarious scenario, a phenomenal first and nape-tingling buzz nevertheless.

During the ascent up Kjerag, shortly after leaving Øygardsstølen, a fear of falling I refused to acknowledge tried to slide its way up from my stomach. The hike was demanding enough on its own with some steep sections at the start and middle of the trail with chains. Still, I needed to stop catastrophising. Jason exacted a promise from me to take the greatest care when stepping on and off the Bolt. Oh, and to avoid dying.

Relative to the other iconic hikes we’d soon have under our belts, the trek to Kjerag has to be described as moderate. Abruptly, it began with a steep climb to the cliffs from 640-metres above sea level to 825 and then wound along the fertile Litle Stordalen. Clearly indicated with red markers all the way, the well-trammelled path then followed a track up and over a new ridge before coming down into Stordalen, the valley behind the Kjerag Massive. The path then wended a little towards the Lysefjord and from that point, ascended along the edge of the massive over polished granite out to the cairn at Nesatind. We arrived with the clamour and excitement of the circus coming into town. Up there facing the rock jammed into its seemingly solid position for the first time, there was only so much room in my stomach. At that moment, the entire space was taken up by a raw nervousness of plummeting. A touch of nausea and growing uncertainty ensued as I visualised being the author of my own avoidable demise.

Startled out of my musings of going over the edge by a guy that did just that. My jewel of the evening, we bore witness to a balls-as-big-as-churchbells bloke slack-lining on a strip of webbing perhaps 200-metres long, elevated directly over the fjord below. Utterly distracted from myself, I lost count to the number times he abandoned his balance and purposely fell. The only thing saving him from hurtling to his death was a harness and a few metres of rope connecting him to what looked like a line of dental floss.

On tenterhooks, we all quietly wondered if the line would snap but it didn’t. Intentions clear, he continued to disturb and then calm the line, adeptly rose to his feet, arms outstretched. Skillfully, he took 10 steps and then fell. Just for the sheer hell of it! He hung like a spider from a thread, pausing in a beautiful moment to absorb his surroundings. Each time, he swiftly uprighted himself on the line and put the cycle on repeat. It was endlessly fascinating. For us watching the spectacle, time seemed to stop. And then the guy turned over, thought for a bit, and begun spooling forwards.

Without further ado, my stomach lurched and I decided, Right, I’ll do it now before I take leave of my crazy and return to my senses. Sometimes, I think Jason’s images contain insights into the beauty of the landscape which transcend the naked eye’s ability to record.

Nerves strung like wire, I’d waited all day in a quiet fever of tension. It was dismayingly clear to me that in a heartbeat, things could go beyond the tipping point. One wrong step and it’d be game over. Slightly rounded, the convex-shaped rock made any safe entry and exit increasingly tricky by the fact there was a fine layer of dust coating the surface. Not overly slippy in the right footwear but not altogether grippy either.

To my mind, experiencing the Bolt was a difficult operation anyone could perform, the equivalent of a pianist playing Rachmaninoff’s “Rhapsody on a Theme by Paganini,” except that one dare not miss a note or fluff a phrase. The adrenaline-fuelled day ended without incident and night slowly cloaked us in soft, safe silence. Just 600-metres down the Lysefjord from Kjeragbolten lies a leviathan cubic-shape mass, sheer on three of its four sides with a flat tabletop. Known in Norway as Preikestolen, Pulpit rock, is another iconic and incredibly popularised destination which saw circa 65,000 people visit in June 2019 alone.

Firmly featured on the Instagrammer’s map some years ago by Norway’s tourist board circulating a picture. The mountain plateau was made more attractive by its debut in the latest Mission Impossible 6 film. (According to the locals, Mr. Cruise made no bones about doing all his own stunts on the rock – atta boy Tommy.)

Starting proceedings at the mountain lodge, Preikestolen Fjellstue in Geirangerhe, a moderately easy 4.5-mile (7.6-kilometre) stomp ensued. Based on the research, we allowed four hours for this round trip trek which ascended 1,150-feet (350 metres); in reality that’s about right.

Having passed up the opportunity for a quick dip, we trekked for a while on slightly hilly terrain – sometimes in the trees with no real views to recompense me – the sudden glimpse of the imposing flat rock jutting out soon revitalized and sharpened my senses.

An impressive 2,130-foot (650-metre) drop stood between us on the Pulpit and the fjord below. I kept my eye on the edge like a kestrel watching a vole. Beyond the massive fall down to a water world opened up a distinct and familiar feeling of fright in my stomach. My face, I could feel, was pursed in concentration.

I edged to the near-vertical face with gut-plunging clarity as my precarious position was revealed. Free from the confines of the forest that strived to conceal you within its twisted green grasp, I could at last savour being on top of the world. The Pulpit towered above the fjord, its near-perfect sides jutting out against the moon-washed sky.

Having completed the trek just before some full-on, world’s-about-to-drown rain that seemed to want to beat you to the floor, we met someone (wishing to remain anonymous) who proffered his sea-house to take refuge in for a few days.

In this case, a sea-house was a giant man cave chock full of comfy sofas, glass coffee table made from a boat’s wheel, a giant projector and Sky television. Both of us are deeply indebted to this guy – what an overlander’s diamond.

“Get a load of that – that’s it!” I barked above the roar of blessed tourists in all shapes, sizes and ages. Best as I tried to blot them out, I zoned in on the thinning blade of rock jutting out over Hardangerfjord. It’s a sight, alright.

Perhaps one of the most spectacular Norwegian destinations hiked to date, the trek to reach it was an enduring 15.3-miles (25.5 kilometres) long. It incorporated a sizable 3,630-foot (1,100-metre) elevation gain too. Budgeting eight to ten hours round trip based on official guidelines, we somehow made it there and back in six and a half. Heck, we must be edging towards getting our Nordic hike on.

Beyond pleased we did, we took the decision to camp overnight and begin proceedings 1.2-miles from Skjeggedal (where the majority start at the P2 car park) at the P3 shuttle service point farther up – a private and somewhat costly place to be dropped off but well worth the numerous switchbacks and wad of Krone for the elevation saved.

The first steps of a long stomp into the unknown, carrying your world on your back, are always exhilarating, empowering even. You feel as if you could keep going for a hundred miles, whooping and yelling, “The path is as where I take it, I move as I choose and I sleep where I fall!” It’s the ultimate existential joy.

I’d mentally prepared myself for the long haul, felt good after the training under our belts to date but the first hour was just plain hard work. Any mountain goat stride I was hoping to assume was clearly hopeless optimism. Hiking steep terrain in the hot sun behind Jason’s sure-footed pace, at one point I slumped down on a rock, lay flat out and coaxed myself into not vomiting. I felt clammy in a cool unease.

My progress was stultifyingly slow. I registered my dubious grasp of the business at hand, while acknowledging the moxie it’d taken to make it this far. Less than a mile. My breathless misery was compounded by the normally breathing day-trippers carrying zero or minimal loads. I contented myself with smiling vaguely and avoiding eye contact with anyone making it look easy.

Rewarded en route by the Ringedel Dam, and plenty of flat interspersed with mildly undulating terrain, I was grateful we chose to wait for a favourable weather window. Conditions are unpredictable, and the scaremongering stories around the mother and her one-year-old baby returning with frostbite, others suffering from the onset of hyperthermia and the unlucky ones dying from exposure, are all true.

We packed light, right down to sharing one sleeping bag and made do with prioritising just enough calorific food and the bare essentials, full camera ensemble as well. Glugging down natural spring water on the fly, we replenished our water supply from running sources en route. At one hydration stop, two young boys walked by, deep in conversation. An inadvertent sexist undertone notwithstanding, “Your mum is so cool, she could almost be a man.” [Drier than dry: What did I miss?]

Long story long, we arrived footsore and our backs in bits. Far from designed for hauling one’s load long-haul, the steel frame of Jason’s camera bag pressed into my spine for the hike’s duration. Packed with people, my brain was roaring from the hordes more than the precipitous height. That said, a squished sandwich at the end of a massive yomp tasted more sublime than the finest Michelin star cuisine.

Alas, one sleeping bag between the two of us meant sleep became a lessening and lusted after commodity. Eventually rewarded by a 5am start the following morning, gave rise to an exquisite vantage point of the beautiful fjord. Alongside an unearthly stillness. Just me and my vertiginous surroundings, adrenaline zinging, triumphant. Not one of us dared speak, so great was our reverence for what we were experiencing. That, or we just didn’t want to risk awakening the sleeping masses.

A tissue of mist lingered over the slither of rock before the sun slowly burned it away. There permeated in my soul an exhilaration, a settled expectancy to the long-haul back and bulldog spirit clothed in peace. 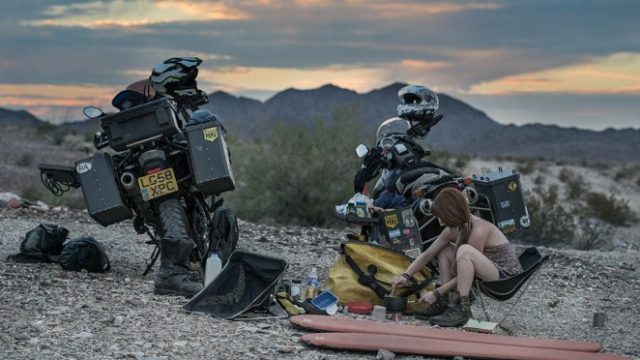 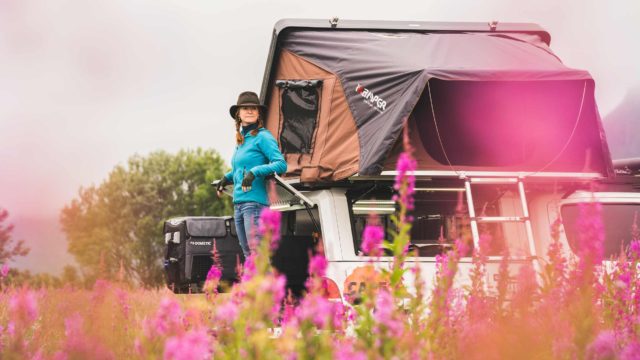 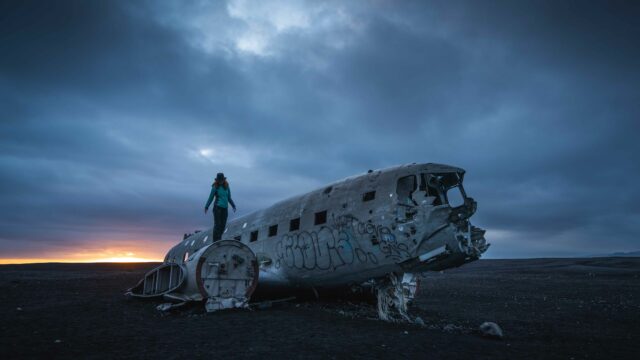