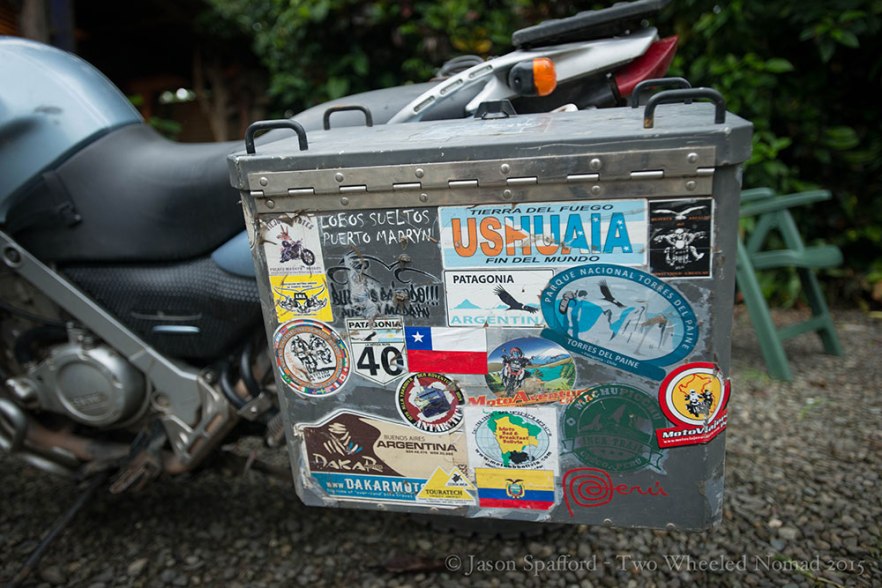 Sometimes, the best kit upgrades stem from a story and the switch to the Metal Mule UTE panniers resulted from just that. Commuting to work along a busy road in rush hour, I stopped at a roundabout to survey the myriad traffic flying around various quadrants, when a double-decker bus nudged into the back of me. Knocked off balance, my motorcycle followed suit and hit the ground. The BMW plastic cases all but smashed into smithereens launching my lunch into the air and leaving my work attire strewn all over the road. Weeks before setting off for the Americas to ride ‘bottom up’ on and off-road to Alaska, a desire to invest in an adventure-proof luggage system—built for the long-haul—became an absolute necessity.

Placing an order for two sets of 38 litre UTE panniers, the mounting racks, brackets, D-rings and rubber feet for my older F650GS (2001) and Jason’s F800GS (2008) was a seamless process. And a convenient one because Metal Mule offered to bring the panniers to us, helping to fit them at the Horizons Unlimited event forty minutes from our doorstep.

The install was speedy, straightforward and executed without a trace of fuss; everything bolted up cleanly. A staff member from Metal Mule assisted in the process and checked the final set-up with a meticulous eye. Pleased with the fit and finish, the panniers also looked fit-for-purpose in preparation to transport our equipment on a long distance two-wheel adventure.

Before setting off on the Americas trip, to my mind it made sense for us both to be outfitted with the same panniers. Partly because the security mechanism on the lid—a simple spin lock that can be secured or loosened with one hand—is a one-key-fits-all scenario. A godsend for a motorcycle couple because one can be locking up all four panniers with the same key while the other is busy elsewhere—in our case—looking for their keys. (Spare keys come as standard.)

Interestingly, one of the pannier locks was tampered with and I’m thrilled to report that the perpetrator neither managed to break the lock, nor get to my precious cargo. The aluminium also gives me permanent peace of mind because nobody knows whether the pannier is bulging with valuables or virtually bare.

The UTEs are practical, not pretty. Both rectangular block shaped boxes are identical, which give rise to a perfect symmetry and maximisation of space; neither pannier has been cut into to hug the bodywork or exhaust for example. I find this particularly beneficial on days where I need to carry extra food and water; I always have the space in which to do so. Moreover, because neither one has been cut into, there is no likelihood of “sagging” post the motorcycle hitting the ground with impact.

Many might disagree but for me, the 45 litre boxes would have promoted over-packing and unnecessary strain on my factory-lowered bike’s worn suspension. The 31 litre capacity panniers may have forced me to take less, or realistically the same amount but with the stress of having to art-precision pack each day, which is always a joyless endeavour.

Thrilled with the 38 litre size I chose, the Metal Mule panniers of any capacity can be repurposed into numerous items for various tasks on the road: a step, a stool, a wind-breaker for the cooking stove in windy conditions, a sturdy base on which to support the bike during front-end repairs to name a few. I prefer using mine as a table, which prevents accidentally kicking over the red wine when wild camping under starry skies.

The pannier lid opens out away from the motorcycle at an almost 180 degree angle, which acts a tray. This is ideal when preparing food, rummaging for something, packing up etc. The inner lid is lined with a strip of foam rubber that forms a strong seal to ensure the panniers remain waterproof. Particularly useful in monsoon downpours; leaving our contents bone-dry and sanity levels intact. The weatherproofing of the panniers is performing admirably after two years of all seasons ranging from -22 to 40 degrees Celsius.

After incurring several spectacular low-speed ‘offies’, been bashed into by the odd road user and having fallen on loose gravel while being towed bike-to-bike, one of the panniers has bent out of shape somewhat. Grateful it was my box that buckled under the hammering and not my leg, the panniers have prevented injury to my limbs and damage to the engine.  Due to my F650GS not having the option to fit crash bars, I am incredibly grateful for the said protection. Furthermore, because the panniers boast a 2mm thick aluminium material, any fragile contents stay unharmed whenever there’s a crash impact.

I’m also thankful that the aluminium has sufficient flex to facilitate the absorption of energy created from the bike hitting the ground to the pannier. Why? If the UTEs were utterly inflexible, the energy transferred from any crash impact wouldn’t be absorbed by the boxes, but by something else. Namely, the odd field repair to my panniers will always trump a cracked sub-frame for instance. The resultant indentation to the pannier has been pushed out with a little persuasion by the brute force of rocks on the roadside.

Metal Mule manufactures and stocks all the individual parts for the UTE boxes including the compatible but optional extras from the MAX panniers. Should anything wear out, it’s good to know that replacements can be ordered and shipped, or company repairs made.

Living with the UTEs

The only real shortcoming of the UTE panniers is the screws. They can be prone to a little rusting when the panniers are constantly exposed outdoors. If the pannier hits the ground with a degree of force, the screws don’t usually although can bend on occasion. Fortunately, the screws don’ easily bent back into shape and are a standard size so make them easy to replace on the road.

Admittedly, all the niceties have been removed such as the ability to quickly remove the panniers from the racks.  Although I understand that most of these can be added as optional self-fit extras. Disassembly of the panniers from each rack isn’t slick but is simple. It takes about a minute to make the space and remove both pairs of screws from the inside of the panniers, in order to hoist them from each bracket. The metal D rings aid the process of lifting the boxes off, particularly when fully laden with all your gear. However, that’s what makes the price tag affordable.

Having used the UTE panniers for 20 months practically every day, we’ve hurled every kind of abuse imaginable at them. Including 30,000 miles of: washboard corrugations, gravel, sand, dirt, mud, water crossings, through rainforests, deserts, mountains, up volcanoes and more besides. They perform as effectively in snow and ice as they do in the blistering heat, at 5,000 metres or sea level. I endorse the strength, simple operation and weatherproofing; they do exactly what hard panniers are supposed to do.

As a moto-travelling couple who wanted to invest in the trip rather than high-end equipment with all the bells and whistles, the UTE panniers are near perfect for adventure-seeking, budget-conscious motorcyclists. Overall, I’d unreservedly recommend the panniers to anyone wanting hard luggage and value for money from your hard-earned pounds. It’s hardly a surprise that they were awarded the RiDE magazine “Best buy” in a recent independent review of 12 metal pannier systems. Why? Personal experience of the panniers has shown me that they are secure, resistant to damage and designed to last, which with an affordable price tag is a glorious set of product credentials in this day and age.