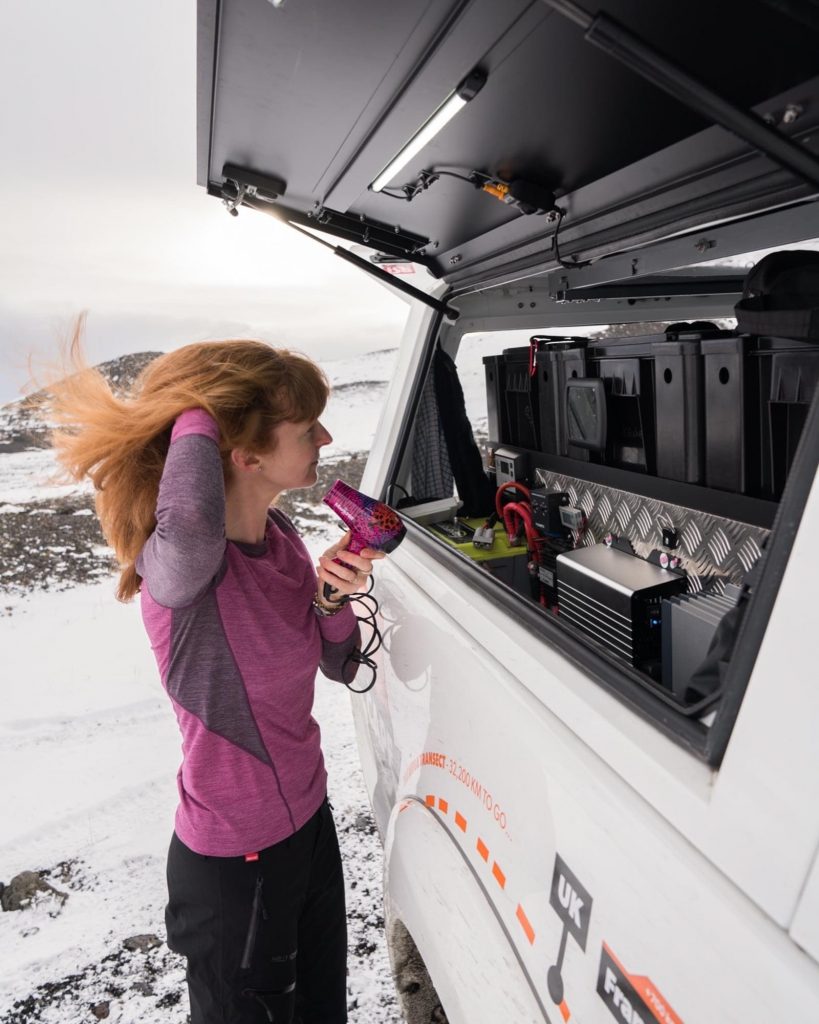 As a pair of location-independent Brits on an expedition called The Mega Transect, Transporter Energy has supplied us with a lithium-ion battery for White Rhino, a 2015 Toyota Hilux, for an all-terrain cape to cape jaunt across the globe. In our first 4WD, we kick-started proceedings from the UK, made a beeline for the Nordic countries, and eventually we will overland the African continent.

Having begun on dual sports motorcycles with 101 lead-acid battery stories without a happy ending, from 2014 to 2018 I rode 80,000 miles – taking in Antarctica to the Arctic – while telling tales from the trails as Jason captured the jaw-dropping sights along the way.

Spring 2019 saw a big change, and switch from two wheels to four, leaving lead behind for lithium. Without question, Transporter Energy’s lithium addition has completed the solar power ensemble to make our journey a reliable one, diminishing all real concerns about charging up. So far, it has assisted us through the Scottish Highlands and the Hebrides, dipping into Europe to reach Nordkapp, Northern Norway onto the Faroe Islands and Iceland among other countries, before going all out to tackle Africa.

To date, the trip has entailed munching miles through conditions as unfavourable as -12C with an Icelandic winter wind chill, zero visibility snow and golf-ball-size hail to hot-as-blazes Norwegian heat. Time and again, we traversed demanding terrains in Iceland’s interior such as black ice on snow-compacted dirt tracks, volcanoes laden in rocks and loose earth, and icy river crossings. An unbelievable privilege, it was like getting a window back on when the woolly mammoths roamed.

Thanks to Transporter Energy’s support, we have the means to keep all of our appliances and devices – 50-litre electric coolers, hairdryer, smartphones, laptops, USB devices, professional drone batteries, and more – on and fully charged, which previously had been impossible if not a stator-failing struggle on multiple occasions. Note to self: don’t charge your drone batteries off your motorbike!

It’s pretty overwhelming that the power we now have at our disposal derives from just one little unit. A powerhouse of energy, it has enabled us to set out on a self-sustaining, unassisted and independent journey – all drones blazing. With 20 times faster charging, 10 times more life and 200 per cent longer power than traditional leisure batteries, the lithium bad boy we have in our possession gives us complete confidence in staying off-grid to our heart’s desire. Namely, there’s no background stress-induced worry about overheating or possible explosions, which would be game over in White Rhino – particularly as we venture by ourselves into game reserves from remote African country to country.

Ultimately, the battery fulfils the “independent” in staying location independent. It’s a must-have in any overlander’s arsenal.