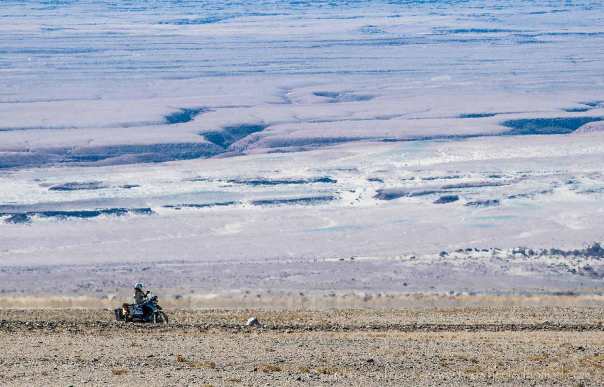 The beauty of having your own wheels means we executed our own sorties each day while using San Pedro de Atacama as a base. Our first self-facilitated foray into the desert took us to Valle de la Luna, Chile’s equivalent of Valley of the moon. I’d clocked the coaches carting around the day-trippers but thankfully the park was big enough to disperse everyone adequately enough. Its resemblance to the surface of the moon was remarkable, owing to its different stratifications and salt formations. We took ourselves on a cruisy circuit stopping when the urge took us; sauntered over the odd sand dune, bobbled over the bumpiest salt-stiffened road to date, siesta’ed in the sun post lunch and indulged in a light read. It was biking bliss. I overheard one young woman who, after completing a guided walk faced her tour guide and exclaimed, “Well that was absolutely not boring!”

A backpacking Canadian couple joined us for an afternoon’s banter and evening beer turning our ‘down day’ into anything but. It was terrific timing on the desert’s first overcast day since our arrival, and further brightened by an exuberant street carnival that made a peacock look drab. I took a shine to the pair’s easy-going personas, exhibiting a self-contained ease to be both interesting and interested. Our kinda people.

A bit deeper into Desierto de Atacama the following morning took us to Laguna Cejar and Laguna Tebinquiche. The first one was located near Ojos del Salar, a pair of sinkholes whose circular outlines were crystallised in salt the way a cocktail glass is sugar-frosted.  The were puzzlingly positioned in the middle of an expanse of vast volcano-lined desert. It was like looking down into two pools of mint green liqueur. Laguna Tebinquiche was a lagoon whose resident flamingoes had taken flight elsewhere although the puna plover birds were in attendance. I’d taken my swimmers to see if I had the backbone to float in these salt-dense waters; turned out only my big toe had wanted to dip into the icy cold water while my back was contented to stay bone-dry.

We hung out in the desert oasis town for around a week, partly because Jason had ordered a shipment to replenish his depleted stores of quadcopter propellers. He was still mastering the artful intricacies of an airborne drone, battering both his blades and fingers in the delicate process: ‘learn by doing’. I couldn’t help but notice that it’d taken 36 hours for his blades to arrive into a flyspeck town in the desert; my parcel from the UK had been held by Argentina’s customs since the end of June. To my mind, it screamed out a health warning: Think twice before shipping products, any personal property or even paperwork to Argentina.

The government will doggedly deter you from bringing goods into the country and a bit like all bad faith insurance companies, will put up grim persistence throughout a tireless resistance towards anyone fighting for what’s legitimately theirs. Passing traveller or not, whether they’re gifts over imported goods – makes not the merest of difference. Argentina use the word Aduana for their Customs department but the Department of Attrition would be far more apt.

Like Argentina’s mistreatment of its worryingly starved, street-wandering mongrels, I cared little for the country’s bureaucratic and seemingly corrupt customs. I’d been warned about sordid tales stemming from Argentinian customs from an ample number Argentinians, whose imported goods had been received by the department six months previous yet still not been released. Gifts sent to our Argentinian friends such as cases of wine from Australia had simply slid into obscurity. Despite these wrongdoings I still clutched to the thought like a child with a doll that being an international optimism-toting traveller, I could slip through the system and gratefully receive what was rightfully mine. The realist was starting to curse the inner-idealist in me. I could rant of robbery in an unusually vocal manner but it’d do me no good to brood on an all but lost battle. I’d have to park this troubling thought with a shrug of resignation, might be I’d have to write it off altogether. My rankled redhead required a ‘Worzel Gummidge’ replacement back to my old chipper one. There needs to be a new word for the gear change in emotions towards the ‘system’ responsible for ruining your untainted view of a country in a single moment.

I rudely digress. The diversity in the desert’s daily temperatures must be making my mind dwell on matters that will pan out one way or another. A route led us by luck to Salar de Atacama on a ride out somewhere further north. This in turn took us to Laguna Chaxa, which was about 65 kilometres from San Pedro de Atacama – one we’d been previously seeking with a fine-tooth comb but to no avail. En route, a Chilean couple stopped to lavish us in an unprecedented level of love, the wife Gloria all but devouring me whole standing at four foot and a peanut and Joberto, her husband happily handing over his Chilean address and full contact details to Jason, insisting on a plethora of photos before reluctantly taking leave of us.  It was slightly overwhelming on that occasion but wonderful at the same time that people were enjoying the sight of the bikes and I guess us riding them through their country.

Laguna Chaxa was home to a flamingo-breeding site! Although three of five known species of flamingoes come to feed and breed there; James, Chilean and Andean, I was content simply knowing the wading birds were there at all. They were feathered in signature coral pink plumage with their protruding bent bills filter feeding in the lagoon.

Like the flamingoes, the Andean avocets were also pretty tame if not tolerant to our presence. Shorter legged than the flamingo, the avocet bird had an unusually slender upturned bill with striking patterned plumage to boot. It was a day for the zoom lens and snappy reflexes alongside a first for seeing a flock of flamingos in an awe-inspiring arc – departing one lagoon to a neighbouring sister pool. I lingered for as long as I could absorbing the setting like a soothing salve to a skin itch. In weaving around the potholes and patches of sand, I watched the dust devils dance to their own tune while Pearl speeds me back to our hostel. The evening’s supermoon was about a third brighter than other moons – made fractionally bigger as well from being a bit closer, thanks to a fairly uncommon courtesy of its elliptical orbit. All in all the day had been, well, a wonderful one.

Like a gutless wimp at the start of our next sortie, I fully assumed the weak will of a wuss. Destination: ALMA. Atacama Large Millimetre / Sub-millimetre Array. Eh? One of the world’s most important international observatories ever to be built and still being built. My position? Bottom lip out at the bottom of a volcano. Jason’s inner astro-geek was determined to find this revolutionary radio telescope sat upon the Chajnantor plateau – whose surface of its antennas is smooth to within the thickness of a human hair – by any means. The security guy in front of the barrier of the main road leading straight to the observatory, tersely insisted we would be going nowhere near his highly protected pride and joy. He was about as fun as a funeral. I understood a media pass that would take four weeks to issue as well as passing a medical with flying colours, would allow us to sail through security. That was about as feasible as squeezing silver from a silverfish.

An alternative route Jason had cursorily gleaned from Google maps, which scaled a volcano would however take us to our desired destination. According to a sketchy line on the satnav anyway. I suppose there had to be rain to get a rainbow; I conked out at the first sandy hurdle ascending up said volcano. No road as such marked the map, we were simply scrambling up sandy tracks that suggested a way toward its summit and ALMA thereafter. Pearl’s front wheel, like my first realisation sunk in without solace; I knew where I stood with the ripio, my ‘good to me’ gravelly friend. There was only a trace of ripio in sight. I therefore had to battle against a sizable lack of skill to tackle this sandy travail. It was standing in my way with a certain connivance. After a prolonged moment of doing nothing, Jason sat back and patiently waited to let me figure it out. Timely as it was, it was difficult to absorb Jason’s advice in my indignant state.

I was flooded with a natural buzz once I got going, albeit an adrenaline-laced shaky one. Admittedly I’d pondered too long and some ‘snotting and screaming’ in protest down the helmet’s intercom later, it was well worth the irrational fear I’d harboured but managed to relinquish. We carefully meandered around the volcano’s rough and tortuous edges, treaded over patches of snow and eventually reached a height on a par to Everest’s base camp. Over 5,200 metres in sub-zero temperatures but my my, it was beautiful up there. I felt vulnerable, dizzy at quite a torturing altitude and high on elevation. It was no wonder we were getting bloody nostrils with less oxygen making the air thinner, colder and drier.  Just a few hundred metres from reaching the observatory, we met a barricade of sand. As someone that wasn’t a seasoned sand-rider, we were forced to turn around. Shame as Jason could have probably made it solo. On the return trail back, a smattering of smugness seeped in as Pearl somehow managed to avoid going down in the sand, unlike Jason who was filming me in anticipation that I would! Alas, we didn’t reach the desired destination of ALMA but having got as far as I had, was good enough for me. 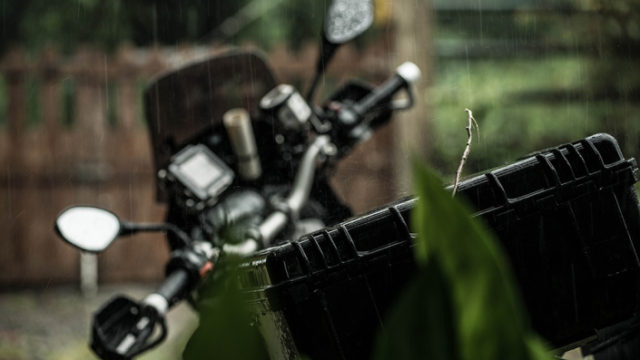 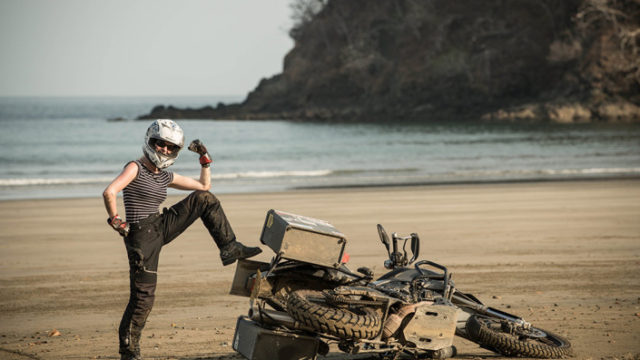 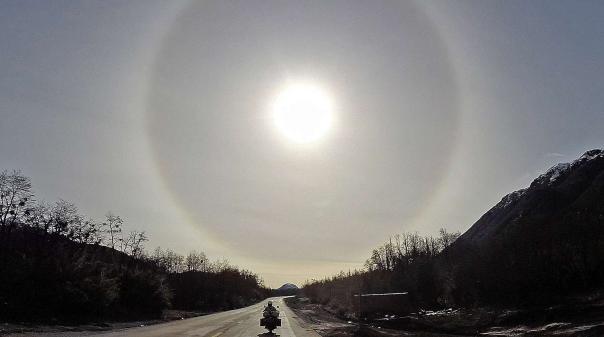 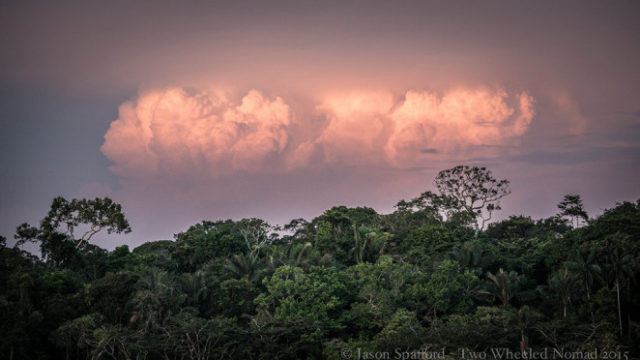 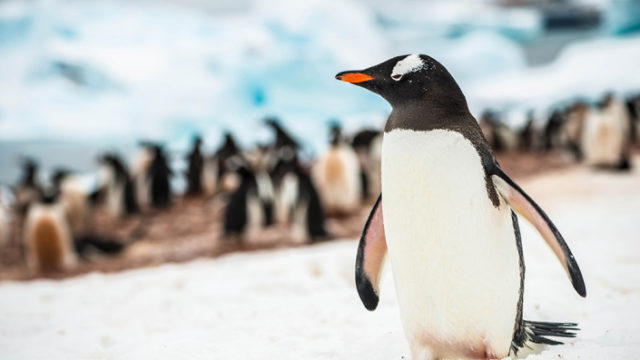