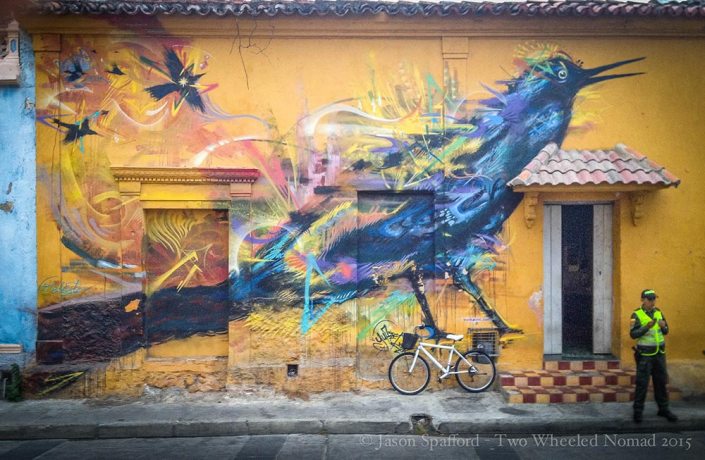 “Where the plantain are we gonna park the bikes for the night?” I barked down the helmet’s intercom at Jason, as we cruised into Caucasia around dusk. Scruffy buildings with washing strewn all over them dominated the municipality. Daylight was rapidly receding. Some Scots cruised up on their 1200ccs, the three amigos whom we’d missed out on meeting in Medellín and the five of us unknowingly kicked the side-stands down at a US government protected hotel. I was in high spirits as we walked away from the reception desk, somehow having managed to assimilate a negotiation of room rates strategy into my lexicon of survival Spanish for the group. A few friendly beers and a night’s worth of banter later, they offered us a trio of eyes for Central America, the Scots’ next destination. Fine fellas.

The next morning, the sun beat down with a club like intensity and my clothes clung diabolically to my body in clammy wet folds. Our daily norm. As we bounded through the overcrowded barrios—neighbourhoods via a busy connecting road, I did my utmost to ride like a Colombian motorcyclist; sticking my neck out and overtaking in the face of oncoming heaving great freighters. I’ve got quite a way to go to compete with the locals, not being the first to observe some were bearing flesh the shade of roasted coffee beans. Which reminded me, I was going to need sunscreen factor ‘Paint’ in a realistic aim to baste over bake here. Upon enjoying the hiatus of a departing sun but by no means the humidity—the ugly sister part of Cartagena unfurled her least redeeming features.

Reuniting and spending half a week in Cartagena with Mikey and Orla was outright cheeky postcard fun. From beginning to end, we seemed to spend more time erupting cavernous laughs than anything else, and saying our goodbyes was easier than the previous two occasions, knowing there’d be a next time. No drama, hasta luego chicos!

Within half a day from Cartagena, we had mosied on and met Minca, a hidden gem where dense vegetation scaled the mountainside up to a snow capped line before running back down to a sparkling turquoise shoreline. Fruits and colours ran rampant while the sun—searing those in Cartagena below—abated just enough to permit a lovely breeze atop our Sans Souci hostel. It took the edge off the afternoon’s hairdryer heat at least. An invigorating dip in the hostel’s cosy pool cooled me instantly; the fan in our room didn’t have a prayer in keeping up. Drying off almost immediately, I swung gently from a hammock, falling into a leave-me-here-forever siesta.

Minca is the perfect place if you adore your nights to be almost as hot as the days, alongside seeing to the odd spell of lethargy in the height of the heat. I liked the early evening best, when the light wrapped every contour of the landscape in a patina of pure gold. I looked out from our hostel, a perfect viewing platform to simple Colombian life settled upon the mountainside. Gorging my eyes on four toucans making their way home as the sun started to set, auburn red squirrels dashed from branch to branch while hummingbirds fluttered around frantically. Just eyeballing them was exhausting. It’s official: I’d reached an unprecedented level of lazy. Dusk deepened into the night, settling over the land like a dark blue cape. The blue deepened to smoky indigo, it was easy to let my soul drift on the beauty around me. Yep, this place in Colombia was achingly agreeable.

Bobbling a little further up Minca’s broken and unsurfaced road, we hit a pot of black gold at La Victoria. Not the oily variety, an English-built organic coffee plantation, now owned by a German couple. All processes were air- and water-pressure operated; every coffee plant was tended by hand including picking each individual bean. I’d think twice about sourcing big city, lower grade supermarket coffee; all the good stuff stays within local villages as a whopping 70 per cent is sold for export.

A fascinating story unfolded where FARC guerrillas came to La Victoria a short number of years back, assumed occupation by effectively squatting on the premises for the long haul. (And Minca in its entirety for that matter, made attractive to the belligerents for its all-seeing-eye vantage points and one-way entry.) The coffee plantation had been left to the son of a German man that had passed away. Frustrated but remarkably composed, the son walked onto his inherited estate, unarmed and calmly sat down to negotiate.

Long story short, the son managed to: communicate the guerrilla’s new responsibilities of running the place alongside the massive debt they’d have to manage against the banks; convinced them all to either embrace such a livelihood; or leave. Not a single shot was fired and without any further persuasion, they all scarpered. Another variation of the story involved the guerrillas working and living beside the German owner, all mucking in to keep the plantation a going concern, before eventually deciding to make tracks and skedaddle. Whichever the more accurate account, it left me with a profound sense of intrigue about the feel-good closure.

Coinciding with our laid-back, hammock-swinging days in Colombia, we sauntered up to Rancho Relaxo, a four minute stroll from the beach and a forty minutes ride to Palomino. I gravitated towards the personable owners, around my age, particularly Ryan who laughed enough to migrate an entire flock of birds. The place sat in a beautiful setting with rates to match, so I casually enquired if they had a website, declaring that we were carrying a drone. A twinkle in Ryan’s eyes suggested that he guessed the fanciful direction of my thoughts. And I felt pure gratitude when I noted his expression—his face every feature a picture of understanding. The rates for a private room plunged to within reach; in exchange for ten minutes of raw aerial footage. Winner winner, chicken dinner!

Upon a wish to return to Palomino—and it was a shame that for the first time we lacked the time—we’d hire an indigenous Arhuaco chap called Bienvenido. At the right price, he’d guide us on foot for a week or so, high up and trek deep into the mountains to track down jaguars. Now there’s a lure in its purest form.

Our last look at Colombia came in Cartagena, tucked away high on a stony hill at an Air B&B, affectionately strap lined: ‘Livin in the Barrio’. While not sailing motorcycles to and from Panama on the Stahlratte ship, Ludwig floated around the B&B. Given his professional matter-of-fact correspondence, he was about the most unexpected person known to my imagination. A larger than life German character, he had the appearance of a sun kissed, avuncular hippy. I just had to look at him and thought ‘lentils’. It wasn’t just his appearance that was outlandish—clad in either his snug undercrackers or just a towel—he also possessed a novel sense of humour. I warmed to him instantly; his jokes as my-sides-are-hurting-now funny as his laugh, this guy was a firebrand alright. Playful personified..!

Cataloging his mannerisms as wildly unpretentious, forthcoming without being over-familiar and so effortlessly at ease in his bronzed skin, I felt enmeshed in his happy aura. A solid and transparent sphere of cheerfulness. His lips were pursed in a smile even when he wasn’t smiling. And when he did smile, it curled at the corners of his lips—one movement away from a roar of hilarity about to burst forth. This guy could hardly contain himself and I was in a permanent state of amusement because of it.

To add further fun and frolics to the raft of entertainment, we met Mike, Shannon and Clinton. Two Americans and a Kiwi, all astride splendidly light Suzukis: hellbent on giving me more laughter lines. They were heading south having covered a tidy portion of territory we’d be wending our way through; engaging in a monster information swopping exercise seemed only right and rational in middle Earth. I love it when you get to ‘pay it forward’ with travellers on the road.

Mike had seen previous pictures of us online and must’ve studied me anew because it tickled him pink that I wasn’t “the ‘churchy lady’ with a pocket for her Bible” he’d envisaged—after a few days under the same roof with me. Mike’s voice was perpetually laced with a cheeky streak, which teased the feistiest form from the lot of us. Guttural laughter rose continuously with a boisterous beauty, pervading the close air.

I wouldn’t argue that Colombia was my ‘Go to’ South American country but it was by no means a ‘Don’t bother’ part of the continent. Despite its twice- and thrice-fried, cholesterol-filled, gob-smacking heart-stoppers. Fortunately, there’s a whole array of placatory fruits for the arteries in Colombia, which were totally new to me. The most exotic quickly became an unassuming orange skinned, fleshy green fruit called lulo—whose flavourful taste convened somewhere between gooseberry and lemon. I’d heard of various people raving about it, but believe me, it all but turned my face inside out, sucking the moisture from my mouth in the process. Startling; strange; citric thing. It catapulted me out of my languid torpor if nothing else.

With only a handful of main highways in Colombia, it facilitated travel around its curvaceous landscapes; the Andes and its coffee-covered valleys, the Amazon rainforest, the sandy coastlines of the Pacific and Caribbean, and the Llanos—plains. Unexpected extras like Minca cropped up and the tantalising prospect of jaguars, which restored my confidence in a place whose past is as wretched as it is woeful. It’s a country that’s easier to misconstrue than mitigate—yet it has more on offer than people—myself included appreciate.

So that concludes our 14-month chapter of South America. We’ve meandered for 22,000 miles, mostly up, bearing enough Latin American memories to last a lifetime. And to be fair, I really think I’ve only just gotten a feel for this overland motorcycling malarkey. Admittedly, it’s nowhere near as mind-bogglingly difficult or body-beseeching as I’d imagined, but it is as ‘out there’ as we’d come to date. Not ones to rush, an extended and jaw-on-the-floor year has been spent in almost every corner, nook and cranny of South America—a continent into which we’ve sunk our teeth and hearts.  Bodies a little more intact over budget, we were all set for the next volume. 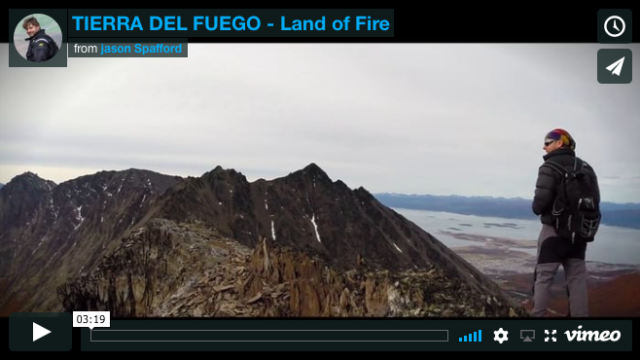 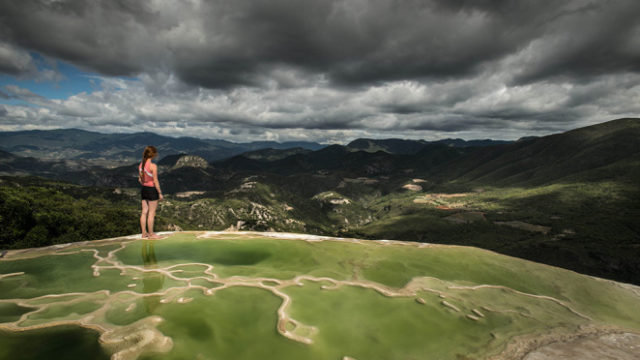 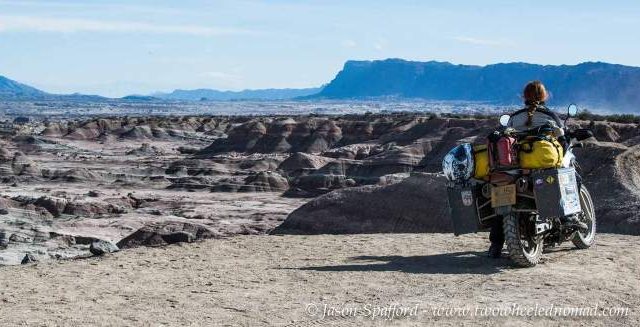 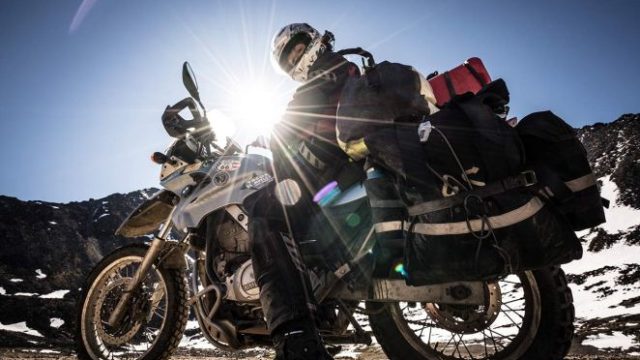 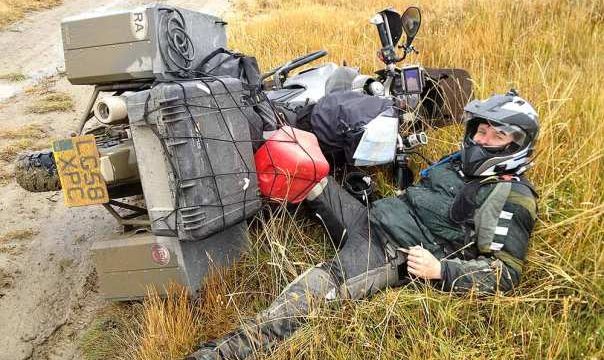 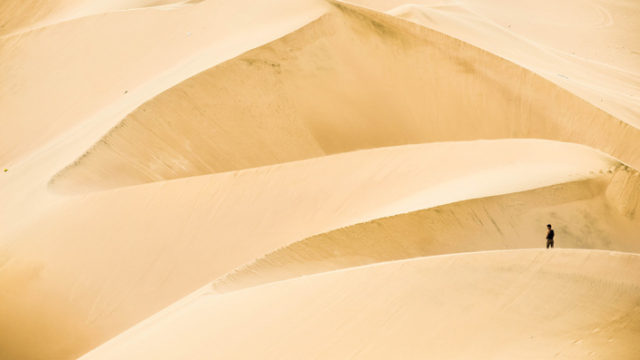