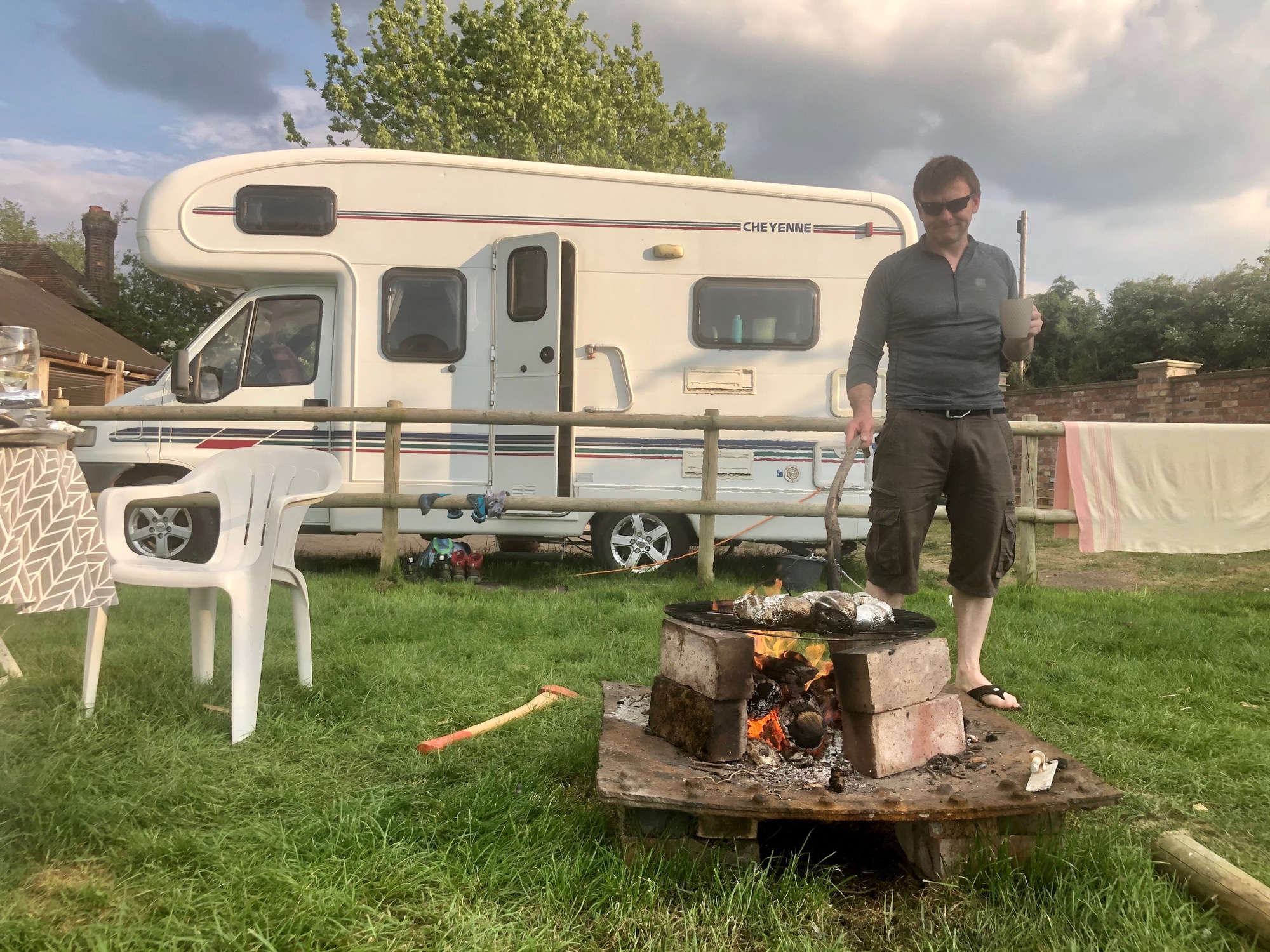 When the World Stopped

It happened almost in the blink of an eye as the news of the spreading virus slapped the taste from our mouths. From March 2020, a new precedent emerged in the desperate hope to curb an Earth-wide spread. Save for essential businesses, the economy came to a grinding halt as borders closed, people were forced into lockdown and furloughed from their jobs—billions left wondering what their strange new every day would look like. Uncertainty was as rife as Covid-19 itself, and I know no one who hasn’t been affected in some way or another. Candidly, the planet’s outlook was increasingly grim, not least for those of us who live to travel whose only viable destination would be Costa del Living Room.

As location-independent travellers since 2014, Jason and I had relied on the privilege to travel from the bottom of the planet to the top, seeing where an unscripted future would take us. Life together side by side on two wheels, for instance, was an extraordinary adventure, packed with more highs than lows.

Suddenly, our world under a bluebird sky had not only shrunk to the size of a pea, but the horizon painted a picture in varying shades of grey. Namely, years of hard work to establish a sustainable life on the road became tantamount to something we would have to shelve as the need to figure out what we’d do in the interim pressed. Ahem, how wrong we were that the pandemic would play out for a few short months. Consequently, an array of freelancing writing projects and other side hustles all ceased. It was time to quit being an ostrich.

Moreover, a lifetime of blossoming friendships and forging countless new ones around the globe were distilled down to weekly Zoom calls and Facebook updates. I’m not angling for you to play the world’s smallest violins for us, but the abrupt lack of freedom to roam was a blow. And doubtless, it was for the world over.

With the Best of Intentions

All set to continue with our Cape to Cape expedition from Northern Norway to South Africa, we managed six glorious months exploring the Nordic countries during the second half of 2019. Recently, we had undergone a travel metamorphosis in switching to four wheels from two, the latter of which had taken us from Argentina to Alaska over four-and-a-half years. While we hadn’t retired from long-distance motorcycle travel, we hung up the bike keys and built out a 2015 Toyota Hilux, “White Rhino,” into an expedition vehicle, predominantly for warmer climes.

January 2020 seemed a sensible point to turn around the truck and ditch the warm layers we’d lived and breathed in through Scandinavia for the summer ones. As well, resupply provisions and throw in the dive gear. Namely, swap everything we had packed to cater to our needs in the wildlands of Iceland for gear and equipment that would stand us in good stead on the African continent. Including ditching the rooftop tent’s insulating layers, which would see us melt in temperatures tipping the ridiculous through Africa. It was also a sensible point to treat White Rhino to a new set of shoes, giving him some much-needed TLC after traversing such unforgiving but staggering landscapes to boot.

Without the Luxury of Hindsight

The New Year commenced with full vigour when we bade our farewells to White Rhino. Off he went as we sent him packing to voyage to Cape Town. Long story long, the container ship docked safely and off rolled our truck onto the shipping agent’s land in March 2020.

Our 4WD had been situated on South African soil for a week when we instructed our agent to pull a 180 and send him back to old Blighty. Apparently, White Rhino had still managed to have a great time—not that he bothered to send a postcard. After much deliberation, there seemed no point paying who knows how much in storage fees to keep our house on wheels in South Africa; we needed our property back. An expensive exercise for sure, but one that you need to write off and chalk down to “Stuff happens, right?” It’s only money, and hey, you can always earn more.

I don’t need to remind myself how grateful I feel to my bones that we’re in good health, and let’s face it, we woke up this morning. My heart goes out to anyone who has been directly affected or lost a loved one.

Someone learned once said to me, “Never be too stupid to be poor.” In austere times, I guess the sentiment of living below our means struck a chord with me more than ever. For the time being, Jase and I had to ride it out in the UK, so we decided to invest in a motorhome, use our truck wheels for essential trips to the supermarket, and live as inexpensively as possible. Initially, until an understanding of the virus’ magnitude could be sought, we battened down the hatches and prepared for the worst. The pace of life slowed to a glacial one, which seemed to heighten the fact it was an apt time to do something constructive. Namely, develop the existing skill sets and acquire some new ones, making the best of now.

Excitingly, on the land we found ourselves situated, I learned to make rope rugs, saw and “chop” firewood, drive a 36-geared tractor to cut the grass in a four-acre paddock and strim its edges, clearing out the weeds and nettles along the way. Jase made marked improvements in our new digs and some interesting ones on his hair—so bad had the Yeti look become—before jumping in a digger and erecting a new fence around the paddock. We took yoga and meditation to a more meaningful level and still maintain those good habits formed.

Ultimately, I think we better appreciated the simple things in life, like taking a walk while being totally present in the now. I embraced the big 4-0, so I decided to cycle everywhere, learn how to paddleboard and wild swim, as well as cook nutritious plant-based meals and the occasional decadent dessert for balance, using the motorhome’s modest facilities. No pun intended, but my Corona Cream Tea was to die for!

Above image by Richard Drage.

Getting Our Ducks in a Row

After a few months holed up in England, we eventually landed jobs on the frontline in our National Healthcare System (NHS) and decided that while World War Bog Roll ensued, we would do all we could to help support our country’s NHS. We’re beyond thankful that a by-product of such employment led to receiving both vaccinations by March 2021. Based on what the scientists and medical professionals are alluding to currently, the virus is hoped to be managed with evolving boosters to combat the new strains. Let’s hope this establishes an improved way of living alongside the virus, sooner rather than later. Mindfully, we have repurposed a degree of our travel content: produced advisory pieces, inspirational-based content around staying creative during a pandemic, how-to photography skills, and guides for future travelling endeavours. I’m thrilled to relay that this has enabled us to replenish the coffers and enact some smart decisions regarding property.

While our prime minister has just begun lifting the lockdown restrictions, it is being rolled out in gradual increments. Essential businesses have re-opened, and now that they are, UK-wide travel is set to open up. And all things being equal, the right to internationally roam may be permitted again in the foreseeable. Our next trip is being carved out as we speak; one that I’m keeping everything crossed will see us traverse bonny Scotland later this spring. Beyond that, everything rests on whether overseas travel will be legal for us Brits.

I’m sure you can relate when I say many of us thrive on adventure, endlessly rugged and a little dangerous, and we share our successes and failures. We’re people that live at large, and the thrill of travelling together for the last 21 years has made our lives tender and raw, tough but euphoric, and inextricably linked. Travel long enough, and something will get at something very deep in you as you deposit heavily in the Good Times Bank. Until now, when “coronavirus” has to be one of the most Googled words since 2020.

What keeps us going is knowing that one day the world will establish a new norm. In the meantime, we should be happy in the knowledge that we’ve made it this far. The pandemic is part of the way that will lead you to something else. So why not absorb the quieter moments with few or no distracting outside influences. Take stock and ask yourself what it is you want to do with your life, and enjoy having the time to pursue it, as much as the act of pursuing it. Who knows, your new aspiration may result in acquiring a new passion and perhaps become an additional income stream. Embrace any interesting opportunity to carve out a unique niche for yourself, which may pave the way to something fresh and exciting. Covid-19, for us, has sharpened the realisation that there is no time to sit around and overthink how life should go. It’s happened and is here to stay, but if nothing else, has left us to stop trying to matter. It has made us ready to simply live. @fourwheelednomad

Apologies, but there are no posts to display.